There are aspects of experience that vary between individual humans, and that contribute to the way individuals think and behave differently to others – aspects that, in other words, make up personal identity.

One of these is the degree to which people experience mental imagery, or picturing with the ‘mind’s eye’. The strength or vividness of mental imagery differs across the population. This is known due to psychologists using a standardised questionnaire, called the Vividness of Visual Imagery Questionnaire (VVIQ), where participants are asked to visualise something then rate the vividness of what they picture, from ‘1’ for no image, to ‘5’ for an image ‘as vivid as real seeing’.

When this test is given to a group of people the results form a bell curve of normal distribution (leaning slightly towards higher scores, because of the social desirability of a ‘vivid imagination’). Most people’s scores fall around the middle of the curve, experiencing some degree of imagery, but at one edge of the curve are those report to lack visual mental imagery entirely, giving ‘1’ for every task in the VVIQ. 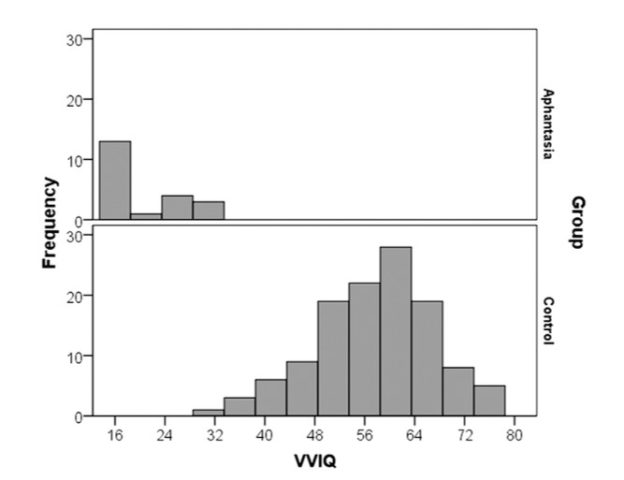 The phenomenon – that some people do not experience visual mental imagery – had been given little scientific attention until it was given a name in 2015 by the British neurologist Adam Zeman and colleagues: aphantasia.

This was publicised in the popular science press, and very soon, and for the ensuing years, thousands of people contacted Zeman to say that they had ‘aphantasia’. Among these, to the researchers’ surprise, were many artists – and designers, architects, and writers – who could not visualise. To investigate this phenomenon of creativity without visualisation the researchers, co-curating with artist Susan Aldworth, developed an exhibition of ‘aphantasic’ artwork.

While the resulting exhibition included 19 visual artists, I want to focus here on the work and procedural narrative of one in particular, which, I think, is particularly representative of the way that aphantasic artists tend to work. This is the British artist Michael Chance, who paints detailed figurative scenes. Rather than being a barrier to creativity, as one might expect, Chance views his aphantasia as a stimulus, because he cannot personally entertain images other than by creating them in paint:

‘The lack of ability to visualise images in my mind is a great motivation; I must physically work on a drawing or painting in order for my imagination to become visually manifest. I often start a picture with no intention and certainly no end goal; it materialises in an improvisatory way. This sense of stepping out into the unknown is thrilling and the subsequent discovery of latent imagery fascinating. Largely bypassing conscious decision making, the way images (usually figures) emerge from my subconscious is akin to dreaming, and the resulting work is often just as strange, surprising and revealing as that would suggest. However (yet, somewhat like dreams) these visions are informed by my everyday experience and observational drawing practice, and structured by my artistic understanding of illusionistic space, light, form and anatomy.’  (MacKisack & Aldworth, 2018, p35]

What is immediately noticeable is the way that Chance describes ‘physical’ work replacing mental work: painting takes the place of visualising or dreaming. This would be a good example of ‘extended cognition’ (Clark & Chalmers 1998): the brain delegating operations that it finds hard, or even impossible, to physical manipulations of external media. Also, by making the images the artist discovers something that they did not or could not ‘foresee’. This process of search, discovery and ‘materialisation’ is revealed by a time-lapse video Chance made of himself working.

The completed painting shows how a reclining, prone, figure emerged – not, if Chance and our interpretation are correct, from the artist’s deliberations, but from the canvas itself and the two faces in profile, suggested by the negative space between them. 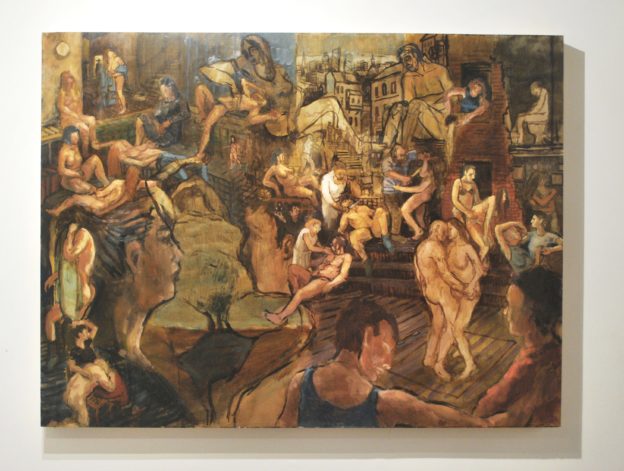 What Chance and his work demonstrates is that the lack of conscious imagery has multiple implications for artistic practice – but none for the creativity of the artist. Imagery ability is not equal to ’imaginativeness’. It seems that aphantasia instead can have a more ‘holistic’ affect on artistic identity, influencing the decisions one makes about how to work and what to do. For example, having no ‘plan’ as such, you just start making marks and see where they lead – in Chance’s case, fed by his training and knowledge of anatomy, figures emerge. Of course, artists without aphantasia also do all these things. And one couldn’t know if a picture had been made by an artist with imagery or without. But that is what the phenomenon of aphantasic art forces us to realise: the diversity of the hidden routes to creation.

Matthew MacKisack is an art and cultural historian, Postdoctoral Research Fellow at the University of Exeter Medical School, and postdoctoral researcher on the Eye’s Mind project. He gained his BA in English Literature and Language from the University of Oxford and PhD from Goldsmiths College, University of London. His work explores relationships between scientific knowledge and the arts, focusing on early-modern Europe. His research has appeared in a number of journals, including Frontiers in Psychology and Interdisciplinary Science Reviews. He co-edited a special interdisciplinary issue of the cognitive science journal Cortex, co-curated an exhibition on the psychology of creativity, and edited its accompanying catalogue. He recently co-curated 'Extreme Imagination - inside the mind's eye', an exhibition of art by people who cannot visualise. View all posts with Matthew MacKisack →