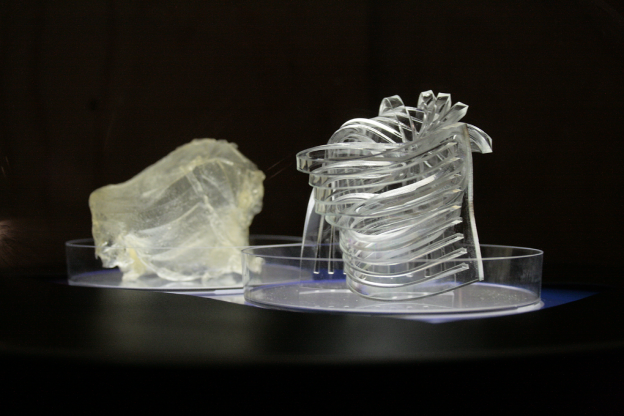 Agonism / Antagonism is a new exhibition resulting from artist Neus Torres Tamarit’s residency in the laboratory of Dr Max Reuter, Reader in evolutionary genetics at UCL, and part of a long-term collaboration with computer scientist Ben Murray.

Torres Tamarit has been on a one-year residency with the Max Reuter laboratory at UCL Department of Genetics, Evolution & Environment, where she has been immersed in the research, techniques, and tools used to study the genetic evolution of fruit flies (Drosophila melanogaster). Dr Max Reuter and his team use fruit flies to conduct research into the evolution of sexual dimorphism and how adaptive divergence between the sexes is constrained by the genetics of male and female traits.

The results of the residency focus on a phenomenon known as sexual antagonism, a genetic tug-of-war that occurs between sexes that share a genome but have different needs from it.

The resulting exhibition reflects the aesthetic environment of the laboratory, Neus’ ongoing interest in the artificial and natural polymers that pervade our environment, the genetic processes that drive sexual dimorphism, and the fruit flies themselves.

The Grant Museum of Zoology, one of the oldest natural history collections in the UK, will host artworks exploring these ideas, presented through a range of media including sculpture, installation and digital animations, set amongst a spectacular permanent collection of specimens.

There will also be opportunities to further explore the animated worlds presented in the exhibition through interactive virtual reality at both the Grant Museum and the nearby North Lodge.

About Phenotypica
Phenotypica is an initiative created by computer scientist Ben Murray and artist Neus Torres Tamarit in 2016. Their objective is to create evocative artworks and immersive experiences about genetics and evolution that engender an emotional response so that audience react to scientific concepts and practice as a human experience.

Working at the intersection between art, science and technology, they are interested in how artworks about genetics interact with the subject and with the audience, and how accurately such artworks present their scientific concepts.

Neus Torres Tamarit (BA (Hons) Fine Arts, Universitat Miguel Hernandez, Spain, MA Art and Science Central Saint Martins, London) is a multidisciplinary artist, that has collaborated as an with the Tate Exchange, Tate Modern, and with the Royal Society.
Neus has been exhibiting internationally since 2007 at venues such as the Louvre Museum
(2009) and Srishti Institute of Art Design and Technology (India, 2016).

Ben Murray (BSc in Computer Science, University of Canterbury, and MSc in Computer Science, University of Edinburgh), has a background in computer graphics, medical imaging and bioinformatics, amongst other fields. He is a Senior Research Associate at KCL, applying machine learning to oncology in a clinical setting. He writes software for digital, interactive installations that reveal the mechanisms of genetics as artistic experiences.