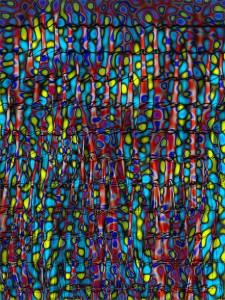 This image related to the mechanism for generation of freak waves in the ocean. The freak waves are not shown-instead, current eddies which cause random concentrations of wave energy are shown as color patches; ray paths were launched from the top of the image, representing waves impinging on the eddies from above. There is a 6 degree spread of the wave directions; in this rendition, the redder and brighter parts of the images correspond to concentrations of wave energy where rogue or freak waves are much more likely. As the wave energy progresses toward the bottom of the image, it becomes more fragmented, eventually varying on a much finer scale than the eddies that produced the concentrations of wave energy. The horizontal black streaks are “phase space” images of the ray paths, taken at various slices which can be seen as brigher horizontal lines. The vertical direction in the black streakes is the direction of the energy sideways (right or left) at that point. The “runners” or streeaks which are heading off at high angle at the bottom of the image can be seen as little balck blotches above and below the main streaks in that region.