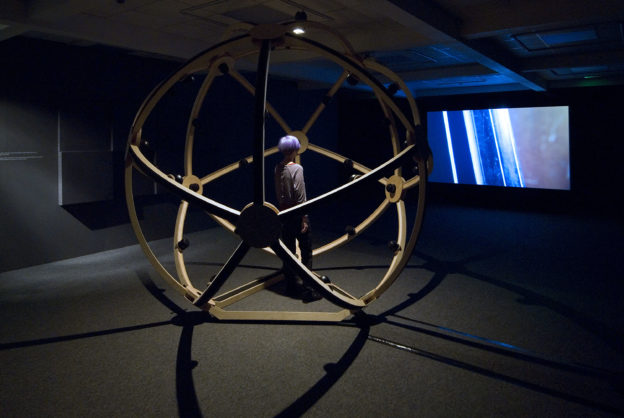 Aura Satz: I studied cultural studies and art history in Bologna (Italy) before coming to London to do a PhD by theory/practice at the Slade School of Fine Art. Initially I worked with sculpture and performance but over the last 20 years or so I have become more invested in film and sound. My works operate in constellations, I have a central theme which might manifest in multiple formats, as films, performances, sound works, and so on.

AS: I was very much influenced by Lis Rhodes who taught me at the Slade, and whom I have since collaborated with. Intergenerational conversations are extremely important to me. I have been teaching for around 20 years now, and I get a lot of inspiration from my students. Teaching also keeps me attuned to practices outside of my own. In my undergraduate studies I was particularly fascinated by iconoclasm and theories of the image based on contact relics. I suppose this has carried through in my later works which attempt to look closely at technologies, prying the apparatus apart, as well as my interest in technologies of sound writing, such as the phonograph – where the groove is a trace and relic of the voice, so to speak. I have always been inspired by female voices, and there are a number of women composers who are key sources of inspiration. I often think of some of the more dialogic works I have made with people such as Lis Rhodes, Laurie Spiegel, Pauline Oliveros, as an opportunity to go deeper into the conversation, not just through the encounter, the film or the recording of a verbal exchange, but even later in the editing process, where I spend a lot of time listening and composing to the cadence of speech or a pause for breath. 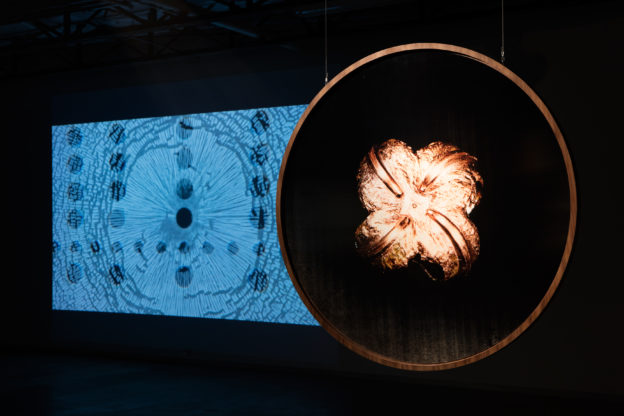 Aura Satz: Her Marks a Measure

AS: I keep returning to the notion of a distributed, expanded and shared notion of voice. Works are made in conversation and use dialogue as both method and subject matter. In my works which draw on historical research I see myself in dialogic exchange with past voices, speaking backwards and forwards, being spoken through. When I have focussed on technologies of sound writing, recording and playback, it is precisely because I am interested in ways in which voices carry through, have been under-heard, and can be ‘listened into speech’. Many previous works focussed on minor histories, using archival research as a starting point, but in recent years I have shifted from the idea of notation of the past towards a logic that is more aligned with a visual or verbal score, an open invitation to think towards possible future manifestations. A score implies a non-hierarchical generosity, suggesting multiple future iterations and no singular privileged way of performing or enacting. Some scores simply suggest a shift in focus, such as Oliveros’ suggestion to listen with the soles of your feet. Many of my works could be read as an invitation to recalibrate attention, ways in which we give it, what is deemed worthy of it, how we might enact a different modality of attention, what we conceive of as foreground and what is background. 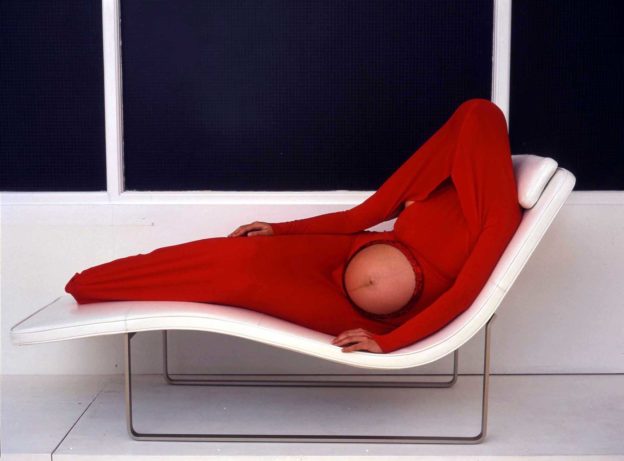 RB: You began working with sound, with the piece Ventriloqua, in 2003 when you were pregnant. A number of your later works are to do with acoustic devices and vibration. Can you give some examples of these works?

AS: In Ventriloqua my pregnant belly became an instrument, a medium or antenna of sorts for a thereminist to play the electromagnetic waves. I wore a red outfit that covered all of my body, including my face, and the only visible part was the belly, which looked like an oracular eye or a breast of sorts. Through the trope of ventri-loquism (belly-speaking) I was able to explore the possibility of becoming a conduit for other voices. For me that performance was a powerful manifestation of speaking and being spoken through. In other works such as Automamusic (2008), Sound Seam (2010) Onomatopoeic Alphabet (2010), Vocal Flame (2011) and In and Out of Synch (2012) I focussed on devices such as orchestrions, mechanical music, phonographs, Chladni Plate, Ruben’s tube and optical sound on film as technologies of sound visualisation, some of which manifest sound patterns without quite constituting a notation system or code, and others which encrypt sound in order for it to be read back by a machine rather than a human. All of these enabled me to explore voices that align, interfere, interweave, synchronise, overlap, overwrite, hover between signal and noise, between decipherable meaning and the unfamiliar and as yet unencoded. 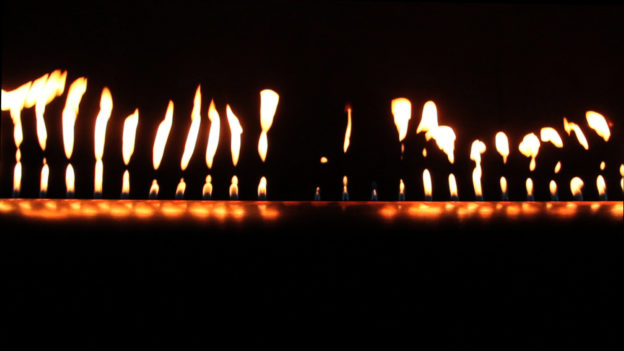 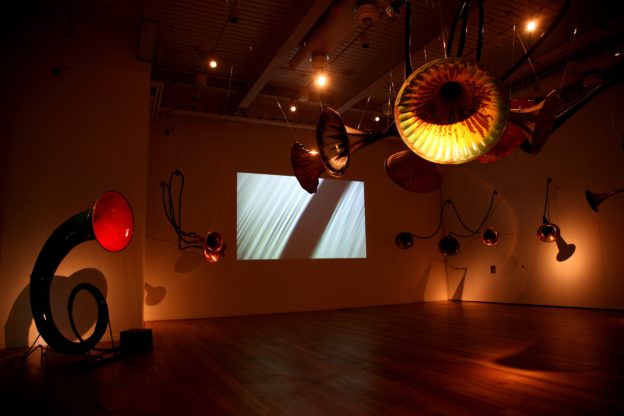 In Sound Seam for example we worked with the surface noises of wax cylinders and vinyl glitch, as well as generating many layers of sounds by recording voices over each other.  At the same time there is something about seeing as informed by hearing, and vice versa, a listening that is in tension with the visible, that I find incredibly generative. This became central to In and Out of Synch, the 16mm film co-scripted and co-voiced with Lis Rhodes, where the optical sound on film patterns conveying our voices are ruptured by stroboscopic effects, due to a deliberate subtle misalignment of the monitoring eyepiece. You end up with a kind of Rorschach effect, certain sounds are punctuated or counteracted by the visual, and their respective rhythms generate a friction that is useful in unsettling standardized readings, making us hear or see differently. 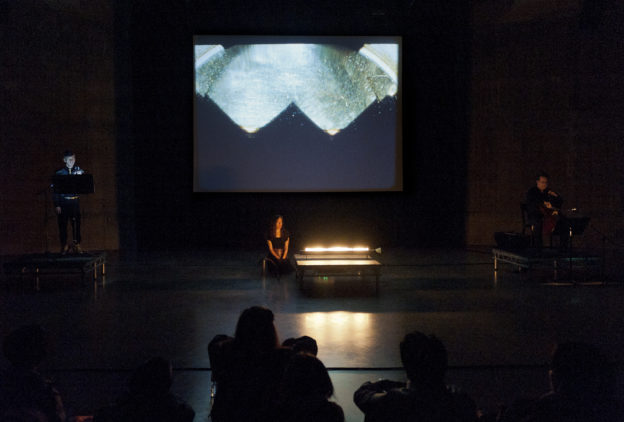 Aura Satz: In and Out of Synch

RB: When did you begin to prioritise film-making and why?

AS: Initially I used film to document performances. When I made Automamusic in 2008 I realised that the only way to get inside these multiple mechanical music devices (which were housed in a museum in a small town in Switzerland), the best method of access to open them up and reconfigure them, was through the camera and the juxtaposition of sound patterns with visual rhythms. In other projects I found that there’s a kind of close-up looking and listening that can only be achieved through film. In my films I am keen to foreground sound, often it becomes the driving force, literally the engine driving the visuals or setting the rhythmic pace of the film. This is true of all of the sound visualisation films mentioned above, as well as a more recent project Preemptive Listening (2018), where the voice triggers an emergency rotating light. A film might feature moments of darkness or silence to allow for the senses to cross-pollinate, the eyes to take on the role of the ears or the other way around. I like the idea of an anagrammatic remapping of the senses, a disruption of hierarchies, a destabilizing of relations, of what is perceived, how, where, by who. 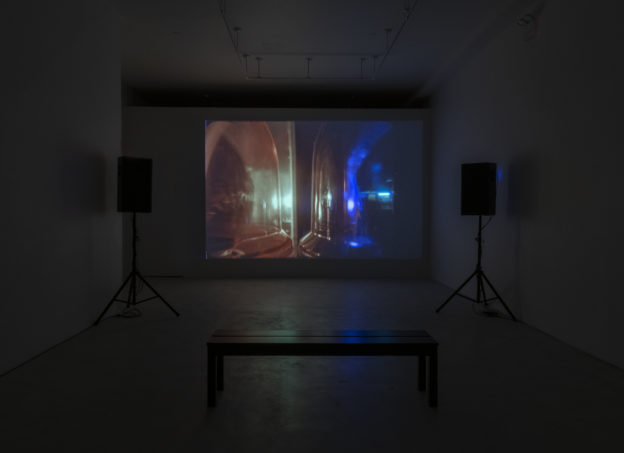 RB: As well as exploring different techniques for visualizing sound, a number of your works focus on gender and women’s important contributions to technology. I’m thinking particularly of Oramics: Atlantis Anew (2011), Doorway for Natalie Kalmus (2013) and She Recalibrates (2018).  Can you say something about these works?

AS: Part of my commitment to the notion of a distributed voice is an unsettling of which voices are allowed, amplified within the range of the audible, who gets heard, who is written into the canon of history, and how can we destabilise these readings to allow for new voices to emerge. The film about Daphne Oram was central to my thinking on sound writing as a form of instantiating a new language or notation system, a new soundscape and in turn a new kind of listening. 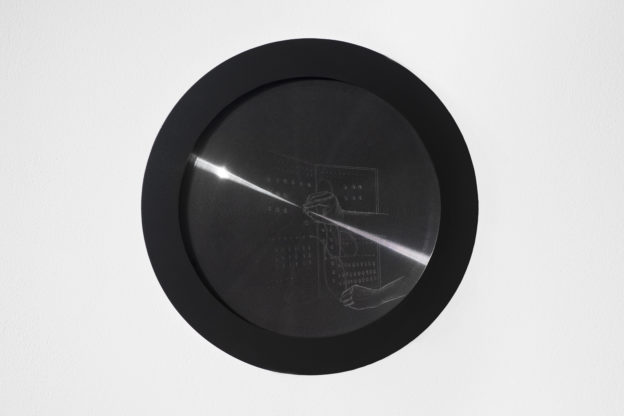 She Recalibrates follows on from this by focussing on women composers working with electronic music such as Laurie Spiegel, Pauline Oliveros, Eliane Radigue, Maryanne Amacher and others, who are portrayed with their hands on a dial, engaged in an experimental type of listening, modulating electricity, recalibrating what is considered noise or signal, what is worthy of being heard, and what can be understood as music. Their hands and ears are literally partaking in the circuit, tuning and recalibrating the signal. I made series of pencil drawings of hands on dials, framed inside a Fresnel lens which generates a diffractive pattern from the centre. The drawings only appear at a certain angle, due to the silver effect of graphite pencil on black paper, but also because the lens incorporates the interference of light reflections. It’s like looking at a lenticular print, or, more accurately, a CD or vinyl record with a diffractive centre, the image is continually changing according to the position of the viewer and the angle of light.  This is emblematic of what I try to do in all my works, allowing for an entangled space between voices, between signal and noise, for both to appear as method and subject matter. 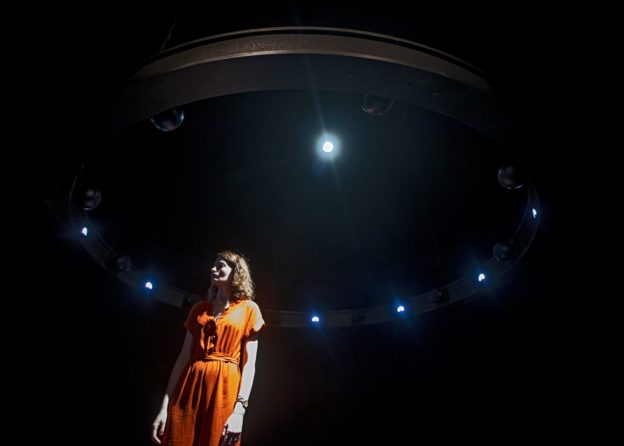 RB: You are taking part in the Science Gallery, London exhibition ‘Dark Matter: 95% of the Universe is missing’, with a sound work Tuning Interference: Dark Matter Radio. Can you say something about your involvement in this?

All images copyright and courtesy of Aura Satz