Field Notes of a Terranaut 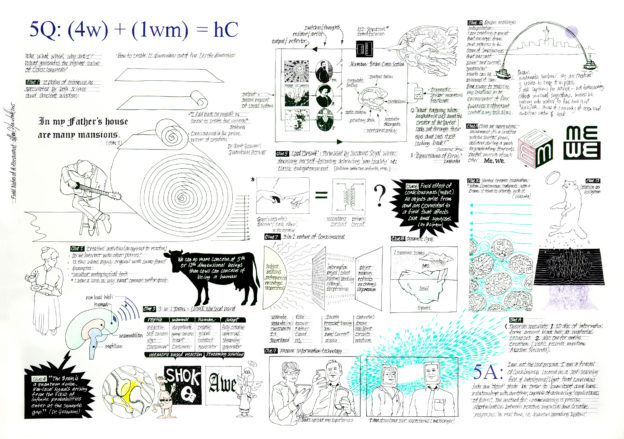 I am more inspired by the field notes of DaVinci Michelangelo than by the finished works often. Here I compile clues from the object realm that can inform me about the ‘one subject of all objects.’ Consciousness. This ChartArt format allows for connections between elements to be made. The title formula refers to : who, what, where, why are we + what method causes the most creative use of consciousness.

The Kabbalah Tea Of Mercy 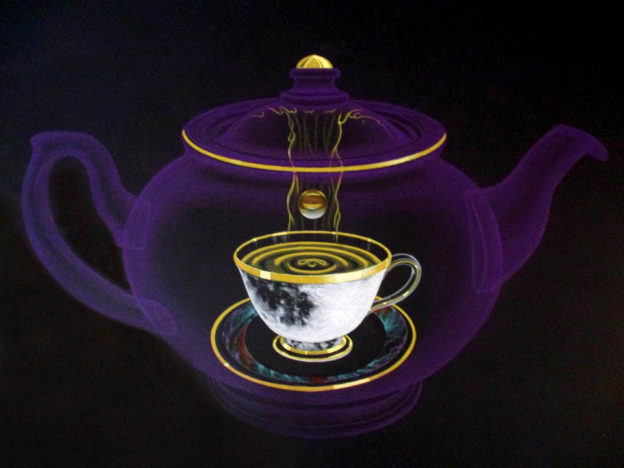 Kabbalah describes the Bestower force flowing into the Receiver, who through a process of discrimination, can attain ‘equivalence of form’ with the Bestower. It features prosaic representations in the form of a teapot pouring into a cup located within itself. The moon patterned reflector / cup references the famous standing wave experiment, particle / wave nature of reality and  the torus structure.

This is my tribute to my three most important influences, Drs Amit Goswami (quantum physics and Vedanta), Bruce Lipton (quantum biologist) and Fred Alan Wolf (quantum physics). All are Quantum Activists subscribing to the notion of ‘primacy of consciousness’. I see them as captains of a new paradigm, on a scale of realizing the world is not flat.  Ice, water, vapor represents the three in one nature of existence, mind, matter, information in a perpetual cycle of self knowing. (Rishi, Devata, Chandas in Vedanta  – knower, known, process of knowing). 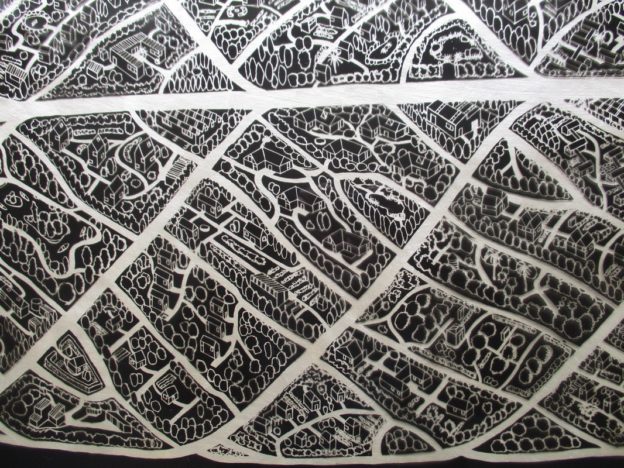 At first glance this lace-like leaf skeleton seems to be a familiar object. Upon close inspection it becomes a visual metaphor for the fractal nature of Consciousness. It also features a hidden message in text form, which I will not reveal for one year after purchase. If the purchaser discovers it, I will share a bottle of Proseco with them. Just for fun.

(For more close detail of this image go to http://www.drawingroom-and-associates.net/fractalton.html)

State(s) of the Arts 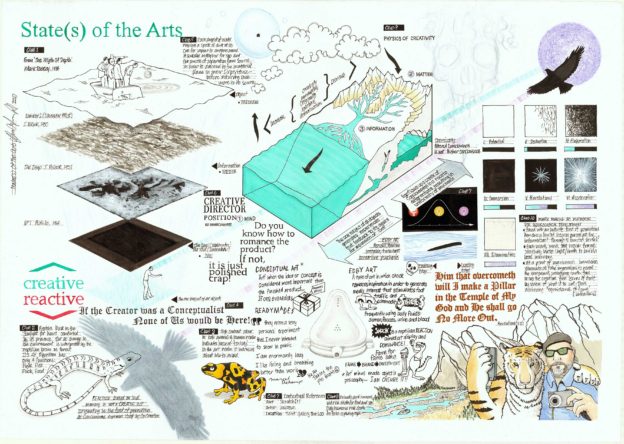 This ‘chart-art’ piece investigates the physics of creativity. It compares from a metaphysical perspective REACTIVE versus CREATIVE responses. It contends that reactive work emerges from the reptilian brain, that migrates to the mammalian brain to formulate an orthodox tribe that seeks membership of a clique, inventing rituals and adopting a language for the purposes of inclusion and exclusion leading to a repetition of the same anti-art, anti aesthetic-cliches which are psychotic.

As a metaphysical artist I am concerned with a three-way comparison between:  metaphysics (science of subject / why), Science of object (how), and information technology, the most important metaphor we have for the nature of consciousness.  Vedic philosophy, describes the three in one nature of consciousness; rishi, devata, chandas (knower, known, process of knowing). Mind matter, information.  I propose the internet is a reiteration of the 3(1C) notion; cloud, i-bods (us) and data flow – truth hidden in plain sight. Inspired by scientist/artists such as Michelangelo, I explore these connections in my field note style art. 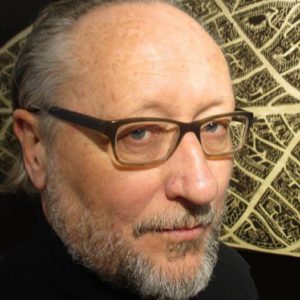 Born in Scotland in 1956, we emigrated to New Zealand in 1962.  My first career was graphic design with a parallel passion in metaphysics that introduced me to comparisons between Vedic philosophy and quantum physics as a describing system for existence. Through a meditation organisation I was introduce to the notion of a source of thought / creative solutions.  I became aware of two streams of thought, reactive and creative.

I learned to trust my intuition when designing for clients and expanded on the idea when creating and directing performances that required amateur performers to generate their own performances around a given framework that produced astonishing results.  Success in attracting governmental and sponsorship support for Freedom Behind Bars, a meditation programme for corrections department prisoners encouraged my notion of a field of solutions that can be tapped into. Twelve years as an academic tertiary assistant introduced me to many disciplines from Architecture to Zoology from which I derived fundamental patterns.   A lecture on electrical systems generated an epiphany that remains the cornerstone of my art practice today.  The notion of existence as a source generating infinite power, that flows through a circuit, resistors that generate various outcomes, to return to the source, fits perfectly with the Vedic notion of consciousness (subject realm) creating the object realm in order to know itself via a feedback system. Since graduating in 2011 with a Bachelor of Design and Visual arts, I exhibited paintings alongside my similarly inclined wife, before finding support from SciArt Center, NY, in the form of a virtual exhibition, magazine interview, and a pop up exhibition opening in December 02 2017.

All images copyright and courtesy of Alan MacDonald