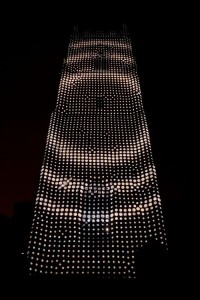 PLENUM, Simeon Nelson, LUMIERE 2011, produced by Artichoke in Durham. Photo Matthew Andrews
Exploring the complementary accounts of creation found in science and religion, Simeon Nelson’s projection begins with a perfect grid of dots which slowly decays into chaos, accompanied by a soundtrack by Rob Godman, with coding by Nick Rothwell.